You want to know how much a check-up or repair of your exhaust system costs?

YOUR VEHICLE’S EXHAUST SYSTEM IS AS IMPORTANT AS ALL THE OTHERS!

This system is not only designed to reduce noise, but also to neutralize environmentally harmful emissions. The exhaust system has two purposes: to reduce the noise caused by the hot gases produced by the engine and to neutralize their toxicity. It’s thanks to this system that you can enjoy a silent, efficient and clean ride. And the system manages to do all this while precariously suspended from your vehicle’s underside and being exposed to bad weather and all sorts of road conditions!

SIGNS OF POTENTIAL ISSUES RELATED TO THE EXHAUST SYSTEM

Have you noticed one or more of these issues on your vehicle? For a silent ride that complies with environmental standards, book an appointment with our experts now.

LEARN MORE ABOUT THE EXHAUST SYSTEM

THE MAIN COMPONENTS OF THE EXHAUST SYSTEM 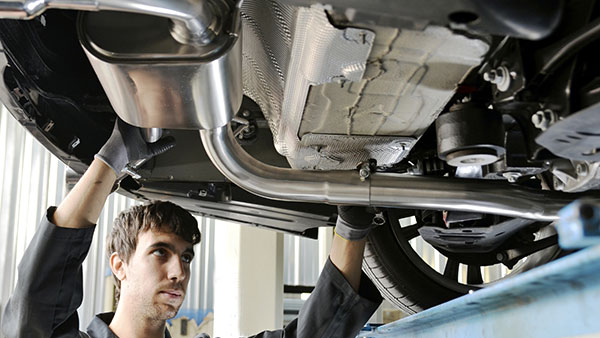 HOW DOES THE EXHAUST SYSTEM WORK?

The exhaust system starts at the front of your vehicle, right behind the engine.

The exhaust manifold is connected to the cylinder head and collects the engine’s exhaust gases. It also reduces combustion noise and transfers heat downstream—toward the rear of the vehicle—to promote the oxidation of unburned hydrocarbons and carbon monoxide. The emissions control process is therefore initiated within the exhaust manifold.

Then, the exhaust gases reach the catalytic converter located further down the system. This device is designed to convert the toxic exhaust gases (carbon monoxide, nitrogen oxide and hydrocarbons) into harmless carbon dioxide and water vapour through a chemical reaction involving platinum and palladium catalysts. Unleaded gasoline must be used in vehicles equipped with a catalytic converter to prevent lead from coating the catalysts and rendering them ineffective.

The oxygen sensor detects the oxygen content within the exhaust stream, which is in turn read by the electronic control unit (ECU) that constantly adjusts the fuel/air ratio to maintain optimal levels. As the values of several variables (RPM, engine temperature, air temperature and coolant temperature, among others) are constantly changing, the oxygen sensor is an essential component that optimizes your vehicle’s efficiency and performance.

Engine noise is the result of a collection of firing frequencies with a wide range of noises caused by the resonance of various components. The muffler silences the exhaust by channelling it through compartments called Helmholtz tuning chambers. These resonating chambers are specifically tuned to cause destructive interference, meaning that the various sound waves cancel each other out.

Having gone through the entire exhaust system, the exhaust gases’ temperature, pressure, toxicity and noise are significantly reduced when they exit the tail pipe.

Is your exhaust pipe giving off an unusual smell?

It’s important to have your exhaust system checked at least once a year. The technicians at Autotech Performance will be happy to do it for you!

MAKE AN APPOINTMENT WITH OUR EXPERTS