Want to get an estimate of the cost for having your car’s air conditioning checked or repaired?

AIR CONDITIONING PROVIDES YOU WITH A COMFORTABLE, COOL AND DRY ENVIRONMENT

Air conditioning has become a standard feature in all recent vehicle models. At Autotech Performance, our technicians can perform all regular maintenance and repair work required to ensure your vehicle’s air conditioning system functions properly. Your comfort is our priority!

THE MAIN COMPONENTS OF THE AIR CONDITIONING SYSTEM 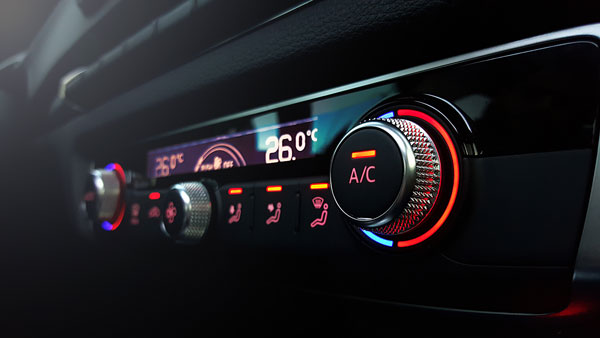 HOW DOES THE AIR CONDITIONING SYSTEM WORK?

Here’s an overview of the air conditioning system. The compressor’s role is to pump and push freon—a refrigerant—through the system when you switch the A/C on by activating it on the A/C control panel. The freon reaches the condenser that dissipates the heat absorbed by the freon and converts it to a liquid. The refrigerant then moves toward the receiver/dryer where it is cleaned and dried. From there, the freon is directed toward the expansion valve that controls its flow into the evaporator and transforms it from liquid to gas. In its gaseous form, the freon then circulates through the evaporator.

The compressor is usually a multicylinder pump. It is driven by a belt from the main engine pulley and turns at roughly the same rpm as the engine. The compressor circulates the freon at a constant pressure, regardless of the engine rpm. A clutch on the compressor allows the latter to disconnect from the drive pulley when the refrigerant temperature reaches the thermostat’s pre-set level, to avoid freezing within the evaporator. The compressor clutch is also deactivated when the vehicle carries heavy loads to redirect more power to the engine.

Freon is a substance with very high heat-absorption properties. As a liquid, freon is very cold—around 150 degrees below zero Fahrenheit. There are several kinds of freon. New vehicles (1994 and up) use “freon 134” instead of “freon 12” because it does not contain chlorofluorocarbons or CFCs. The change was made to eliminate one of the causes of the ozone layer depletion. Note that the different types of freon are not interchangeable.

The condenser dissipates the heat absorbed by the freon. It is located in front of the radiator and is cooled by both radiator fans.

The receiver/dryer is a canister through which liquid freon circulates to be cleaned and dried. It contains a desiccant that dries the freon and a charcoal filter that absorbs its moisture. The sight glass, used to view the level of refrigerant in the A/C system, is usually located at the receiver/dryer.

The evaporator is located under the dashboard on the right side. It is a small radiator-like device in which the freon circulates. A fan blows air from the passenger compartment through this small radiator. As air passes through, its heat is removed by the freon and its moisture is vented to the ground.

The fan blows the air from the passenger compartment toward the vaporizer where the freon circulating there absorbs its heat and moisture and then returns to its liquid state.

The thermostat, located inside the vaporizer, prevents the vaporizer from freezing by cycling the compressor on and off.

The A/C control panel located on the dashboard lets you regulate the temperature and direction of the air flow from the air conditioning system.

You noticed an unusual noise coming from your air conditioning?

The air output is not cool enough? Our auto technicians have the expertise required to check and repair your A/C system!